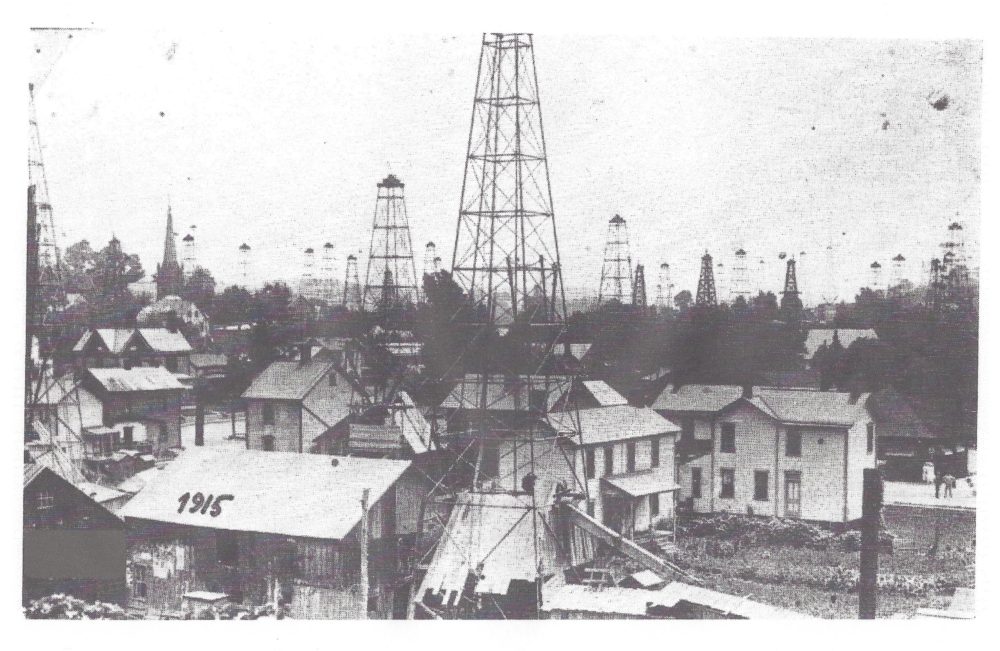 Answer
Where was this old landmark?

This photo was taken from what is now Route 528 at the edge of Evans City Borough. 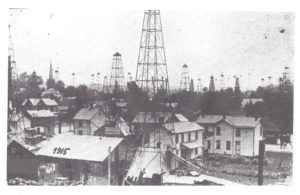 Although there are no oil derricks there now, there was a time when they were in almost every backyard and the air was full of the thumping rhythm of hit and miss engines bringing “Black Gold” to the surface.

However, there is a downside to it too, the paraffin that makes it sweet also poses problems. It forms pockets underground, a little like the paraffin pistols full of sweet syrup that children used to love. It sealed the rock formations and prevented the oil from flowing from place to place as a pocket was pumped out. Now, a well is fracked with an explosive charge deep underground, to release the oil or gas so it will flow freely but in the 1800s, when the boom was in full force, the only option was to move a short distance away and drill another well. Where the oil was plentiful and easy to reach, it led to over-drilling and wells being drilled in every available patch of ground. This practice led to the bristling skyline and noisy, odorous place that became Evans City in 1915. In spite of the rather unpleasant living conditions the town was a bustling, prosperous place and the population grew and then declined along with the oil. 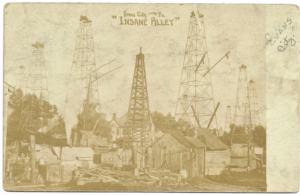 Most of the derricks were dismantled as the oil ran out and were moved to other areas, although, some that continued to produce on a smaller scale were still pumping into the 1960s and even the 70s. Almost all derricks from dry holes that were left behind, did not survive the scrap metal drives during the war years. A walk through the woods and rural areas outside of Evans City today will reveal thick, greasy areas around rusty pipes still sticking out of the ground. Although they are hard to find because of underbrush and accumulated leaf-fall, there are still dozens and dozens of these abandoned holes left behind all over the area. Saltwater tended to accumulate in the pockets as the oil was pumped out and this nuisance water was pumped off daily. Allowed to run into the surrounding soil, the resulting salty ground was relished by wildlife. Often there are large tell-tale holes or washes left close to the well sites where the deer and other animals licked up the soil for years.