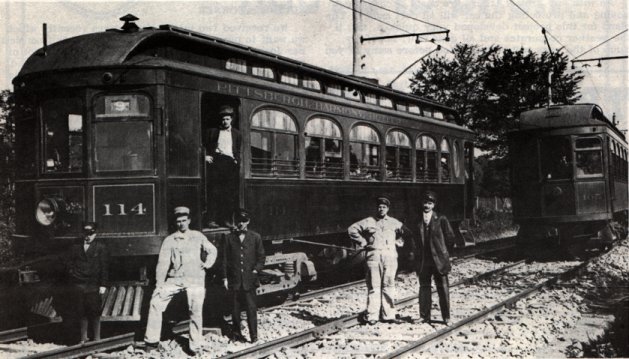 All Aboard The Harmony Line! 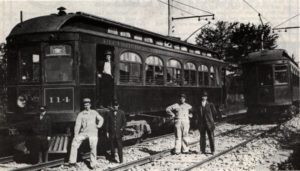 You are about to embark on a trip to yesteryear. 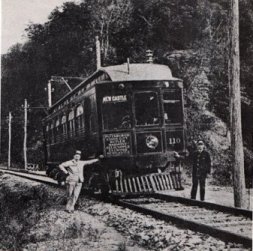 Often, the striking maroon and gold cars were the only means by which children from rural areas managed to attend high school. Farmers depended on the line to transport crops and cattle to the cities for sale. In fact, the Harmony Line played an important role in enabling country folks to electrify their homes for the first time.

The following information is meant to introduce you to the history of the Harmony Line.

Travel between Pittsburgh and the northern communities of Butler and New Castle proved difficult in the late 1800’s and early 1900’s. Though roads existed, they were unlike the roads we take for granted today. Potholes and mud hampered transportation by horse and wagon. Most people had never seen a car, much less owned one themselves.

Russel H. Boggs was a Pittsburgh entrepreneur and Evans City native who owned a department store in the big city. He often spent much of his time traveling from Pittsburgh to Evans City buying farm products from and selling store goods to rural families.

Mr. Boggs and his business partner at the store, Henry Buhl, took advantage of their friendly relations with their northern neighbors to secure a right-of-way for the Harmony Line trolley system. Giving each landowner a dollar and a promise to establish a trolley stop on his property, Mr. Boggs and company began to oversee construction of the line at the Pittsburgh end in the fall of 1905.

By May 1908, the trolley line extended from Pittsburgh to Evans City, and from Evans City to Butler, Ellwood City, and New Castle. Operations officially began following a “trial run” from the Harmony car barn to Ellwood City on Sunday, July 2, 1908. The entrepreneurs were elated that their trolley travel times were better than those of the Baltimore and Ohio passenger trains. 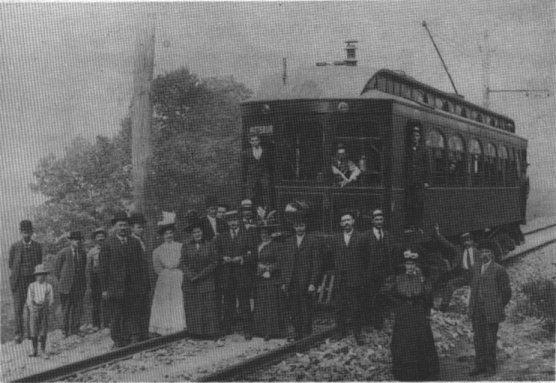 One of the early cars leaving for Pittsburgh from Evans City, circa 1908.

Most of the trolleys used by the Harmony Line had been constructed by the Niles Car and Manufacturing Company in St. Louis, MO. Twenty-five cars were shipped disassembled to the Harmony car barn. Workers assembled the cars and added steel wheels that had been manufactured at the Forged Steel Wheel Company of Butler.

A typical car included three different sections: a general seating area, a smoker section (ostensibly for gentlemen who preferred a cigar or pipe while traveling), and a baggage section. Each car could carry about forty people.

As time went on, the Harmony Line expanded its services to include special party cars. These could be rented for $55 per day. Church groups, school students, and small parties enjoyed movies and card-playing aboard the party cars on their way to and from special occasions. 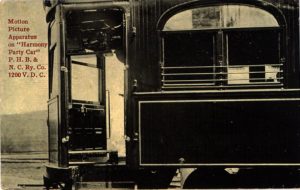 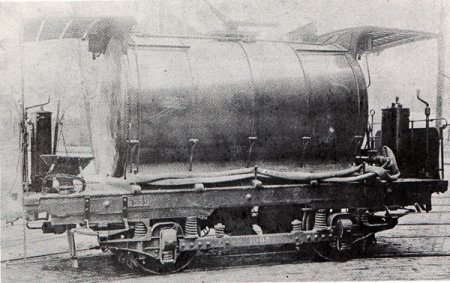 This was a street sprinkler used by the trolley lines about 1910. 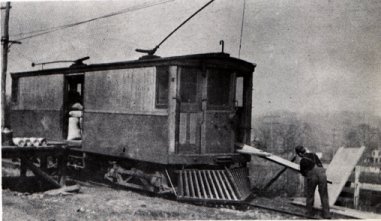 Work cars hauled a variety of materials needed for maintenance along the trolley lines.

The route map for the Harmony Line appears to be a very complicated affair. How could the trolleys ever make decent time to and from the cities with such frequent stops?

Actually, not every entry on the map is an actual stop. Since the trolley cut through privately held land, Mr. Boggs (the president of PHB&NC) promised each landowner his own personal “stop.” Local trolleys did indeed stop at the little sheds bearing names such as Cupps, Smiley, and Grimm–but only if passengers were waiting. Express trolleys maintained their schedules by only stopping at the larger stations.

When the cars of the Harmony Line reached the city limits of Pittsburgh, the trolley operators stepped aside to allow Pittsburgh railway employees to finish conducting the trip. A modest fare of ten cents was collected from each trolley car. 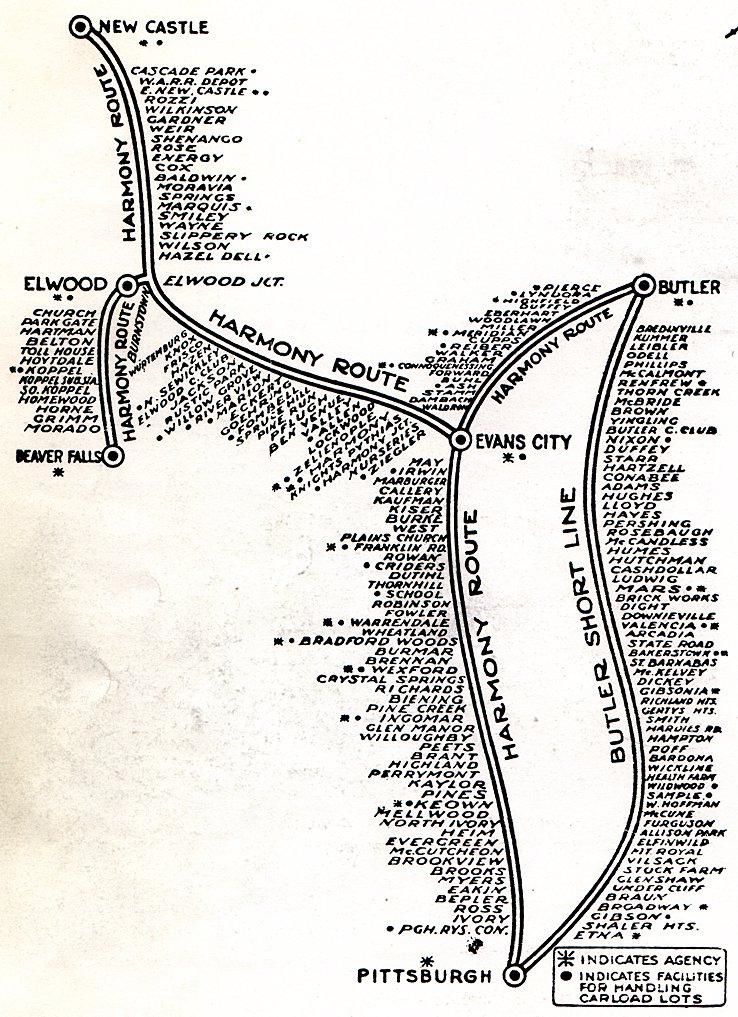 Although the city of New Castle enjoyed rail connections to Sharon and Sharpsville, there was no means of mass transportation to Ellwood City in the south until the advent of the Harmony Line in 1908. The New Castle spur of the line cut travel time to Ellwood to 35 minutes. 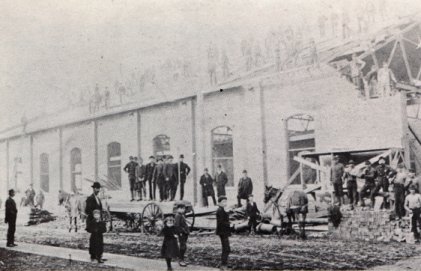 One of the car barns in New Castle circa 1897. Harmony Line trolleys may have stopped here occasionally for emergency maintenance.

Ellwood City was connected by trolley line to the northern city of New Castle in 1908. Five years later the Harmony Line increased coverage with another branch line extending south from Ellwood to Beaver Falls. 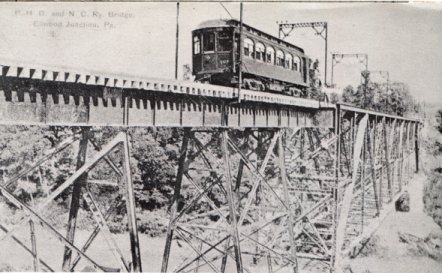 Though there were numerous stops on the Harmony Line between Evans City and Ellwood City, express trolleys only stopped at Zelienople. Local trolleys stopped more frequently, but often it was necessary for waiting passengers to flag down the trolley motormen if they wanted a ride.

Fare between Evans City and Ellwood via Zelienople was 52 cents.

In order to account for changes in elevation levels, the builders of the Harmony Line often constructed trestles that gradually increased/decreased elevation. The Harmony Line entered the city of Butler by way of the neighborhood of Highfield which sat at a higher elevation than next-door Lyndora.

The Harmony Line met up with the Butler Short Line at the Cunningham Street station in Butler. 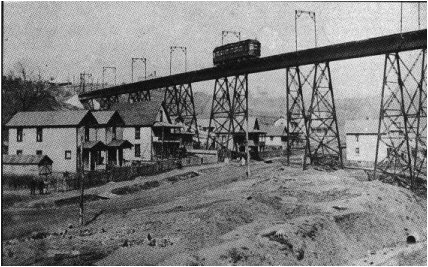 A Harmony Line trolley crosses the Lyndora valley. The trestle has been gone for many years, but at least one of the concrete posts used to support the trestle can still be seen from the location of the old Pullman Standard office building.

The Evans City station was the heart of the Harmony Line. From Evans City travelers could connect to trolleys heading west to Ellwood, east to Butler, and south to Pittsburgh. The main car barn for the trolleys was only several minutes west at Harmony Junction. 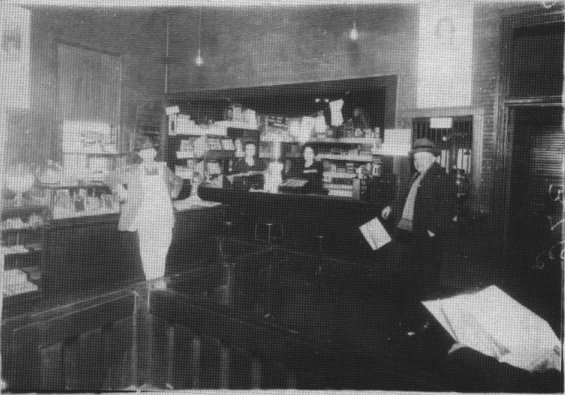 Commuters waited in comfort at the Evans City trolley station. 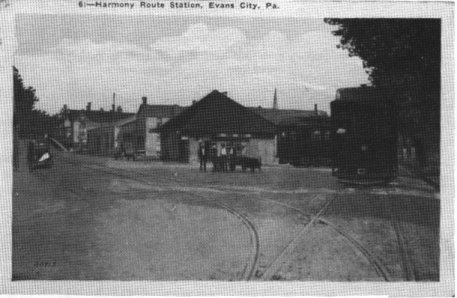 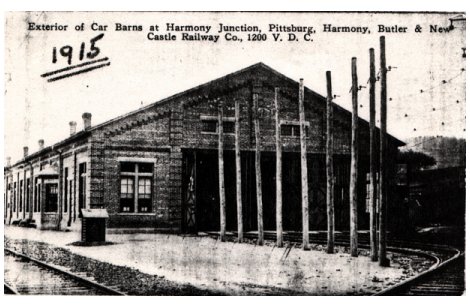 This was the maintenance hub for the Harmony Line trolleys. The building, long since demolished, was located just east of Harmony, Pa.

The Butler-Pittsburgh Route was originally not a part of the PHB&NC Railway, although passengers could transition between the Harmony Line and the Butler Short Line quite easily. The Butler Short Line ran south to Pittsburgh, roughly paralleling what is today’s Route 8. Commuters could expect to be in the big city within an hour of boarding the trolley in Butler.

It is interesting to note that the Butler cars were longer than the Harmony cars. Therefore, the cars could not negotiate many of the turns on the Harmony Line routes. When Mr. Boggs purchased the floundering Butler Short Line in 1917, he slowly replaced the long cars with others similar to the Harmony Line trolleys. 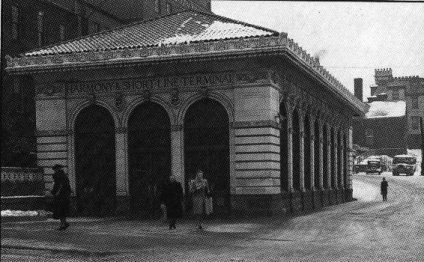 The Cunningham Street station was erected in 1921. 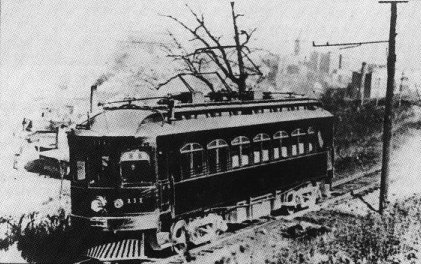 One of the long cars used by the Butler Short Line.

The End of an Era

The rising popularity of automobile travel eventually led to the demise of the Harmony Line. April 22, 1931 marked the last day of operation for the Butler-Pittsburgh Route. The rest of the Harmony Line continued to operate throughout the summer but experienced losses.

In the succeeding years, all of the tracks and buildings associated with the Harmony Line were torn down and sold for scrap. The cars were ceremoniously burned. The Pennsylvania Power Company assumed ownership of the routes in order to continue providing electricity for rural patrons.

Just a few relics of the Harmony Line exist today. Apart from several crumbling edifices, a couple stations have been refurbished. A catering business owns the former Wexford station. And the Evans City depot currently sits for sale after housing a filling station and a used car lot.

Only a single Harmony Line car escaped destruction. You can see it at the Pennsylvania Trolley Museum, in Washington, PA.