These multi-bladed medical instruments are known as a fleams or phlebetomes, named after the Greek words, “Phlebos,” for blood vessel and, “tome,” meaning to cut. They are used for bloodletting, a practice that dates back into antiquity but is rarely used today. This kind of instrument in particular was more often reserved for veterinary use, but the use of fleams on people was not unheard of either. 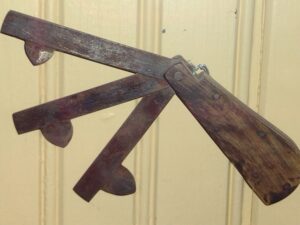 This instrument would be used by placing it over the vein and then struck with a fleam stick, a short wooden club. This would result in rapid penetration of the vein meaning minimal risk to the operator and minimal amount of cutting of the patient’s tissue. After the incision was made and the desired amount of blood drained a pin would be placed through the edges of the cut and then a figure eight of thread was then sewn over the pin in order to keep the cut closed.

Bleeding a patient was almost never helpful and only made them weaker, yet it was incredibly common from as far back as the ancient Egyptians and went as far as into the 19th century. One ancient system of thought that coincided with bloodletting was that of the four bodily humors: blood, phlegm, black bile, and yellow bile. Thus an imbalance of these, “humors,” caused need for bloodletting.

This particular instrument is on display in Doc Stewart’s room in the Wagner House and can be seen when you take a Museum Tour.