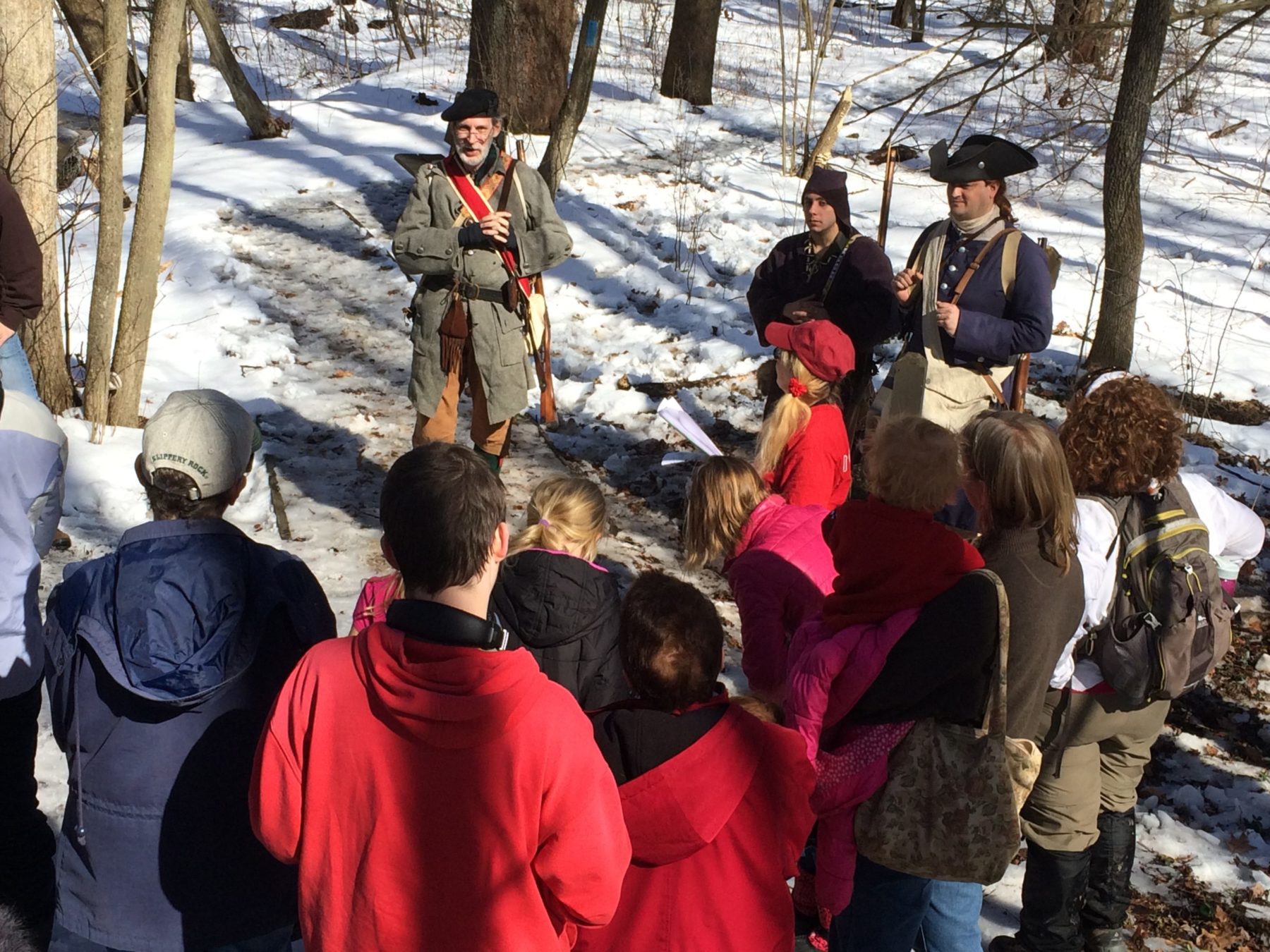 Click here to register for one of the hikes.

SLIPPERY ROCK, Pa. – You can hike through history, stroll through nature, and enjoy some cherry pie on Saturday, Feb. 26, in honor of George Washington’s birthday, and his 1753 journey through the region.

It all happens at Jennings Environmental Education Center, a Pennsylvania State Park at 2951 Prospect Road (Pa. 528) Slippery Rock 16057, just south of Pa. 8.   Hikers will meet reenactors portraying Washington and his guide Christopher Gist, as well as the American Indian the two encountered in the western Pennsylvania woods in 1753. Echoing through trees that morning will be the reenactment of the gunshot that could have ended Washington’s life when he was just 21. The annual commemoration is sponsored by Washington’s Trail 1753, the Butler Chapter of the North Country Trail Association, Historic Harmony, Butler County Tourism and Convention Bureau, North Country Brewing, and Jennings Environmental Education Center.
Visitors can choose from 10 guided hikes and walks. All are limited in size, so hikers must make a reservation by February 20th to secure a hiking spot.  To reserve a hiking spot, go to events.dcnr.pa.gov, then search “Cherry Pie”. This will take you to the page to reserve hike times. There is a $3 per person cash donation, collected at the park, to partake in one of the guided hikes and the cherry pie.

To learn about the history surrounding Washington’s 1753 mission, hikers can sign up for a half-hour “history hike” that includes the reenactment of the attempt on Washington’s life that happened on Dec. 27, 1753 near today’s Evans City.  Washington and Gist had spent the night of Dec. 26 camped in the snow somewhere close by the Jennings site. There are six history hikes, the first one at 9:30 a.m.

Nature lovers can learn more about the Jennings prairie and other park features by signing up for a 75-minute “nature walk”.  These walks are at 9 and 11 a.m. and 1 p.m.  And for those who want more exercise, there is a 7-mile ”long hike” led by members of the Butler Chapter of North Country Trail Association. It starts at 9 a.m. at the Lake Arthur boat launch under the PA 528 bridge and uses a trail that joins Moraine State Park and the Jennings Environmental Education Center

The day’s festivities honor the 290th birthday of the first president. Washington was just 21 when he volunteered to deliver an ultimatum from Virginia’s lieutenant governor that French forces withdraw from British-claimed territory west of the Alleghenies. The French, building a line of forts south from Lake Erie, declined, demanding instead that the British stay out of New France. Washington’s adventure led within months to the outbreak of the French and Indian War. His mission also included two incidents that might have killed him decades before he would command Colonial forces against Britain in the Revolutionary War and become the new nation’s president.

The first incident was an errant shot from the musket of an American Indian, most likely sent by the French to end Washington’s trip back to Virginia. It is considered by many to be the first shot of the French and Indian War. Two days later Washington also survived a tumble from a rudimentary raft into the ice-choked Allegheny River, near what is now Washington’s Landing in Pittsburgh.