HARMONY, Pa. – Antique gun enthusiasts, and those who appreciate early American craftmanship, will converge on Harmony Pa for the annual Antique Gun Show, sponsored by the Harmony Museum. The date is Saturday, August 13, with the show running from 9 a.m. to 2 p.m. in Stewart Hall, which is adjacent to the Harmony Museum at 218 Mercer Street. Admission is $5 per person at the door, with proceeds benefiting museum operations. Youngsters under the age of 12 are admitted free, but must be accompanied by an adult. 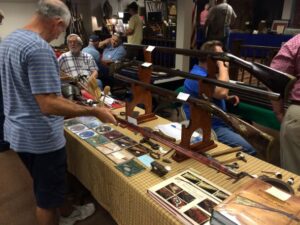 More than 25 specialists will present an array of antique guns, powder horns and other related items from the 18th and 19th century. Many items are for sale, although some specialists bring items of historical significance only to display and educate the public. Visitors can bring items for experts to examine and appraise.

“Most firearms on display are examples of hunting, target or defense long arms used by the region’s settlers,” says Rick Rosenberger, museum member who organizes the event. “The 18th and 19th century gunsmiths in western Pennsylvania developed a distinctive rifle style that adapted architecture and decorative features from light, accurate guns first made in eastern Pennsylvania and Virginia, commonly called Pennsylvania rifles.”

“These antique (pre 1899) guns have a special significance in Harmony,” notes Rosenberger.  “From about 1850 until his 1897 death, Harmony resident Charles Flowers produced fine percussion hunting and target rifles in a shop two blocks from today’s Museum. It’s common for the show to bring to light previously unknown Flowers rifles.” 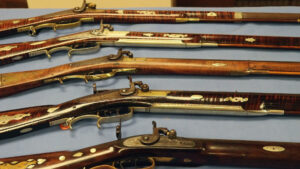 These are examples of the some of the 100+ Pennsylvania riffles made by Harmony (PA) gunsmith Charles Flowers in the late 1800s. Similar firearms and other related materials will be displayed Saturday August 10 at the Harmony Antique Gun Show.– Harmony Museum photo.

More than 100 rifles made by Charles Flowers are known to exist, with a dozen of them in the current museum collection.  Rosenberger notes the show presents an opportunity to learn more about this interesting part of western Pennsylvania history. “You’ll marvel at the craftsmanship,” he notes.

Additional information is available at harmonymuseum.org or by phone at 724-452-7341.

Harmony’s recorded history began with a Delaware (Lenni Lenape) Indian village visited by 21-year-old Virginia Maj. George Washington during his 1753 mission to demand the French abandon territory claimed by Britain and the Virginia colony. The result was the French and Indian War, whose first shot was fired at Washington by a French-allied American Indian near today’s Evans City. Fortunately for U.S. history, it missed.

The communal Harmony Society of pacifist German Lutheran Separatists from the Stuttgart area arrived 50 years after George Washington, drawn by America’s religious liberty. When the Harmonists moved to Indiana Territory in 1814-1815, resettlement was led by Mennonites from eastern Pennsylvania. In 1825 their congregation built the first Mennonite church west of the Alleghenies, now owned by Harmony Museum and listed on the National Register of Historic Places.

The nine-site Harmony Museum presents the area’s uniquely rich history with guided tours of three buildings 1-4 p.m. daily except Mondays and holidays. National Historic Landmark District and other tours can be arranged by appointment. Harmony is at I-79 exits 87-88, about 10 miles north of the Pennsylvania Turnpike and 30 miles south of I-80.